THE RITA – Journey Of The K-Verband (Throat Lure) 7″ Out Now! 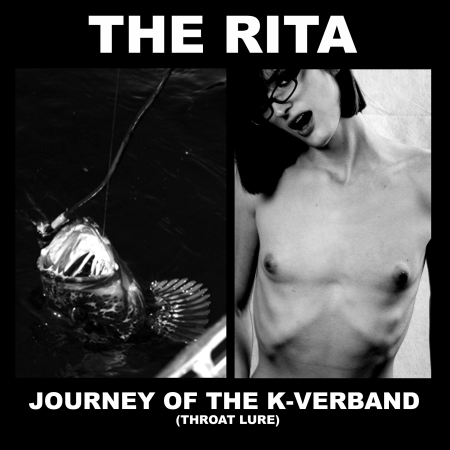 SIDE A
1) Journey Of The K-Verband (Throat Lure) I

SIDE B
1) Journey Of The K-Verband (Throat Lure) II

JOURNEY OF THE K-VERBAND was recorded in the summer of 2011 and is the second chapter of THE VOYAGE OF THE DECIMA MAS.  The K-Verband was the WWII German frogman equivalent to the Italian Decima MAS; taking example from the Italian frogmen and their missions.  THE RITA has used the WWII frogmen theme as representative of the recordings, this time via sound sources from the miking of ocean fishing lures while jigging for Lingcod in the same areas snorkelled for the VOTDM source recordings.  The Traumatone underwater contact mics attached directly to the lures meant that every sound after the various Lingcod took the lure and mic inside their throats was captured for eventual further analogue manipulation.  With almost no trial and error, this technically ‘risky’ technique for picking up natural and violent source sounds turned out even better than expected between the initial taking of the mic and lure, the mic’d lure moving in the throat, and the eventual water surface splashing and the on deck removal of the mic’d lure from the fish’s mouth.
A natural extension between the idea of the VOTDM snorkelling source sounds, the sounds now come directly from Lingcod that occupy the waters just kilometres from the original snorkel site in Pender Harbour, BC, Canada.
Included with the release is an original illustration by BC First Nations artist Larissa Healey commissioned by THE RITA.

Please direct all enquiries to:

One thought on “THE RITA – Journey Of The K-Verband (Throat Lure) 7″ Out Now!”