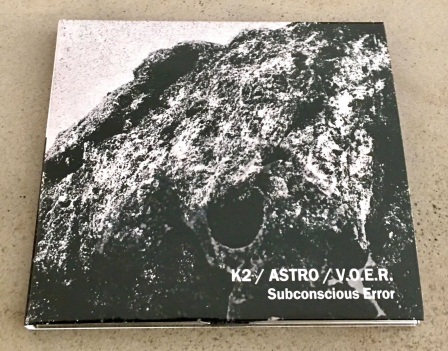 I was hoping this was going to be a collaboration between these three artists but it’s actually separate tracks on one CD. You get two from each.

K2 is the project of Kimihide Kusafuka, he started out making noise music in 1981, a few years later, he suspended his musical activities to finish his studies as a pathologist and returned to music in 1993 after graduating. K2 has used many different implements and instruments over the years and on his two pieces here he uses modular and semi-modular synths and effects to produce two pieces of noise that are continually evolve in a mass of analogue burbling and feedback. Lots of variety and movement throughout his two pieces keeps them from getting dull and predictable.

I was a big fan of C.C.C.C’s psychedelic approach to noise and have enjoyed Hiroshi’s Astro project too. He and Rohco give us two tracks of classic Japanese noise. Their pieces are more full-on walls of noise than the K2 pieces. Huge blasts of noise under pin the more random bursts of different squeals and stabs of dissonance that overlay them. Probably the highlight of the album for me.

V.O.E.R is an artist I’ve not come across before and appears to be a project from Krister Bergman. The two pieces here seem to be linked at least by their titles. There’s The Garden of Eden and A Garden of Flesh. The first piece is a thick wall of noise with some vocals low down in the mix that it’s difficult to make out the words too. Vocals are performed by Primitive Knot who seem to be a band from Manchester. The second piece follows a similar style; a wall of noise with some vocals over the top. You can hear the vocals quite clearly on this piece and the delivery of them almost pushes this towards a metal/dark ambient flavour. Not really to my tastes I prefer less vocals in noises pieces and the style of the vocals reminds of some pieces by Sunn0))) and is all a bit too dramatic and theatrical.
Really enjoyed the pieces by K2 and Astro but didn’t find much to grab me in the V.O.E.R pieces. I might enjoy them more if I heard some instrumental work by them but these two weren’t for me. DB