4iB Records is proud to announce the official release of AUTOGEN “Mutagen” in limited edition CD format of 500 Copies.

AUTOGEN – MUTAGEN
Mutagen is the debut album by AUTOGEN, an experimental solo outfit from Latvia founded in 2008 by frontman Kaspars Kalnins, otherwise known as Kaps. Highly recognized by people in the underground music circuit, Kaps is a prominent and revered player in the Latvian industrial scene both as an event organizer and musician. He is also an influential member of Rosewater, another established industrial electro band formed in 1998. Ever since 2008, AUTOGEN has been active in live stage performance and has played at numerous industrial and fetish clubs in Latvia, Finland, Belarus, Hungary, Denmark, Lithuania, Estonia and also Bangkok in March 2012. AUTOGEN’s shows often display gruesome theatrics of blood, gore and fetishism accompanied by their signature trance-inducing electronic soundscape compositions that exude an enthralling ritualistic atmosphere juxtaposing invocative sight and sound.

Mutagen has finally been realized over this length of time since AUTOGEN’s inception 4 years ago. This inaugural official release comprises intelligently orchestrated ambient euphonies and pulsating rhythms of the Cold Elektro genre, all written during the period of 2008-2012. Containing 12 tracks in total, they are composed and arranged by Kaps, with the exception of two that are done in collaboration with Zemens and Vinings, also relevant individuals in the underground Latvian industrial music scene.

Mutagen promises an aural journey of post-industrial influences with modern sonic elements, all beautifully written and creatively arranged through complex electronic manipulation. It is a mind trip almost dreamlike and surreal, echoing a soundtrack-like atmosphere that overwhelms at many junctures throughout the album. Mutagen’s soundscape of electronic textural layers and minimal sampled digitized voices will provide the listener with a mesmerizing experience of a post-apocalyptic world. The tensions of despair and hope tug at the emotions of the innermost psyche, only to emerge the discovery of eventual order within the realm of chaos. 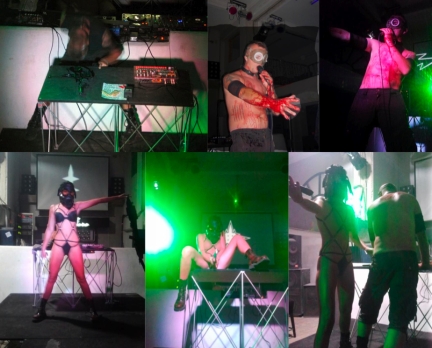 I know that I should have written this review months before, but unfortunately I lost track in between, so this one comes out late. The debut release of Autogen out of Latvia promised to be one of the outstanding releases during the last months for the Dark Electro/Post-modern Ambient/IDM genre. It is an experimental Electronica project by Kaspars Kalnins, also known under his pseudonym Kaps. He is maybe better known for his involvement in the Electro/Industrial project Rosewater or as being the founder of the Latvian cult label Sturm. Kaps is surely one of leading forces behind any activity of underground-related music in this small Eastern European country. This debut album is a collaboration release between Sturm and the new Singapore-based 4iB Records, which concentrates to present Ambient / Noise / Martial-Industrial styles. Autogen has been firstly discovered with an appearance on the latest Sturm compilation ‘Sturmer 4′ DCD set (‘Par Veelu’), ‘Mutagen’ now collects all tracks written in between 2008 – 2012.

Ever since the establishing of Autogen, this project has been often active with rude live performances and has visited numerous industrial and fetish clubs in Latvia, Finland, Belarus, Hungary, Denmark, Lithuania, Estonia and also Bangkok in March 2012. The shows of Autogen are for parental usage only, they often display cruel scenarios of blood, gore and fetishism. The musically direction of this debut tends clearly into the field of demanding Dark Electro music. Projects like The Klinik, Mortal Constraint, or Disharmony have to be named to throw in possible quells of inspiration, although this album in its presented quality would also well fitting side by side with some highly praised signed to the US-based Tympanik Audio label. And so this album explores a wide range of dark and cold sounding Electronica styles and leaves out warmer and smooth sounding ingredients. The work of Mortal Constraint or Ingo Lindmeier’s Polygon-project in its early recordings is surely witness for tracks ‘Nevajag’, ‘Trakumaa‘, or ‘Suurums‘ in its existence. Massive applause for the rather deep drowning, stone-cold Modern-Ambient-like tune ‘Vakaraa‘, one of my personal favorites. That this album is also able to scratch some inner nerves can be discovered in ‘Nederings’, the ideal and raw soundtrack for your next dentists visit. ‘Mutagen’ is a brilliant collection of tracks full of creative sound-design with matured programming skill. No pseudo-aggressive Techno kick-and-snare-bawling on here, ‘Mutagen’ is rather designed to freeze your brain. A nice, cinematic, but also ice-cold sound-trip not to be missed. Get it!

Autogen is an experimental electro project from Latvia. This project is already well known for the live shows that contain sadomasochism, various fetish tools, gore, blood and such.

“Mutagen” is their debut album. In 70 minutes of music and 12 compositions, Autogen offers a dark journey through visions of experimental industrial with a lot of influences from IDM and old school of EBM. The complete atmosphere of this release smells of sex and perversion. Electronic ritual beats are run through the entire album. “Mutagen” functions as single piece split into 12 parts and so it is hard to choose a favorite. The atmosphere on the album never falls, but rather holds the started ritualistic sound image which is a great plus for this release.

The disc is packaged in a fantastically designed digipack with a black slipcase. This is a great album for the late hours, while you play with your partner the various vicious fetish games. Fans of Die Form should absolutely get this album, and probably those who enjoy the newer Kraftwerk. Ritual sex, sadomasochism, pleasure in pain, torture, fetish games, single ray of light, love, perversion… I think this is enough to acquire “Mutagen”.

It’s not often that a Latvian post-industrial/chillwave/ambient electro record comes through the post, so when Kaspars Kalnin’s (Autogen) solo experimentation is birthed after four years, minds must be kept open and ears kept at attention.

The verdict: cold, post-apocalyptic, tense, electronic, dense, and also quite retro (think an aloof Orbital or an ill-bient Autechre). “Frenzy”, “Turmoil” and “In The Evening” are interesting electronic bibelots if anything.

Please send all enquiries about band booking, etc to: