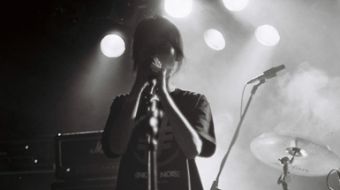 Junko is one of the founding members of the defining Japanese Noise band Hijokaidan (who helped to establish Noise music in Japan through a series of near-legendary performances involving no small amount of disgust and bodily fluids). She is the owner of the most intense voice in music.

Her solo vocal performances are incredibly musical and harrowing confrontations with the very real, physical and aural trauma of a woman screaming.

To really get to grips with what is so affecting in being confronted with Junko’s solo performances then it helps us at least to deal with them on an emotional level, but also to try and understand how this experience forces you to think – a kind of conceptual experience – and what it might allude to. When we have seen Junko perform, there just seems to be something deeply symbolic about it: is a scream a break in language and in what can be said? Is it the otherness of language, or maybe a contradiction: both alive and dead, existing and not, moving between the real and the non-real? Is a female scream the perfect embodiment of Julia Kristeva’s idea of abjection in art?

“Beauty will be convulsive or will not be at all.”
André Breton

Lea Cummings is a English musician and artist best known under the alias Kylie Minoise.

Born in September 1974 in Lancaster and currently based in Glasgow, Cummings was the bassist for hardcore rock trio Phobophilia for some years before forming Opaque in 1997. An ever changing unit with Cummings as the only constant, the unit built up an extensive discography, culminating with the release of the New Ways To Criticise CD in 2004 and a full European tour in July of that year. Their live performances could polarise opinion, with one particularly volatile show captured on the Live In Dundee 28.11.02 EP; an audience member disliked the group so much that he unplugged one of the amplifiers.

Opaque was put on hold in 2004 with Cummings beginning a series of new projects, most notably his Kovorox Sound label which provided a platform for most of his new music and that of peers whom Cummings admired and respected, including Birds Of Delay, Birchville Cat Motel, Kenji Siratori, Ocelocelot (Mel Delaney of Ashtray Navigations, Noma and Nackt Insecten as well as noise artists from as far afield as Russia and China. However, he has become best known performing solo as Kylie Minoise, garnering a considerable reputation for his loud, confrontational Live Aktions which are often brief and invariably culminate in broken microphones and, occasionally, in personal injury.

Described in The Wire (issue 274) as “a short sharp shock of slobbering one-man hara-kiri and gonzo pantomime nihilism”, these performances capture the raw, cathartic spontaneity of Cummings’ aesthetic and he has toured extensively with this project. Interviewed by Plan B, he said “Kylie Minoise is the side of me that likes to make a few cracks in normality, cause a bit of discomfort and increase a few pulses” (issue 17, Dec 2006/Jan 2007).

More information on: Episode 2: A Special Form of Darkness