> PIG BLOOD, NOISE, AND EYEBALLS IN NORWAY: TREPANERINGSRITUALEN INVOKES THE “BLACKNESS OF THE VOID” by Kim Kelly 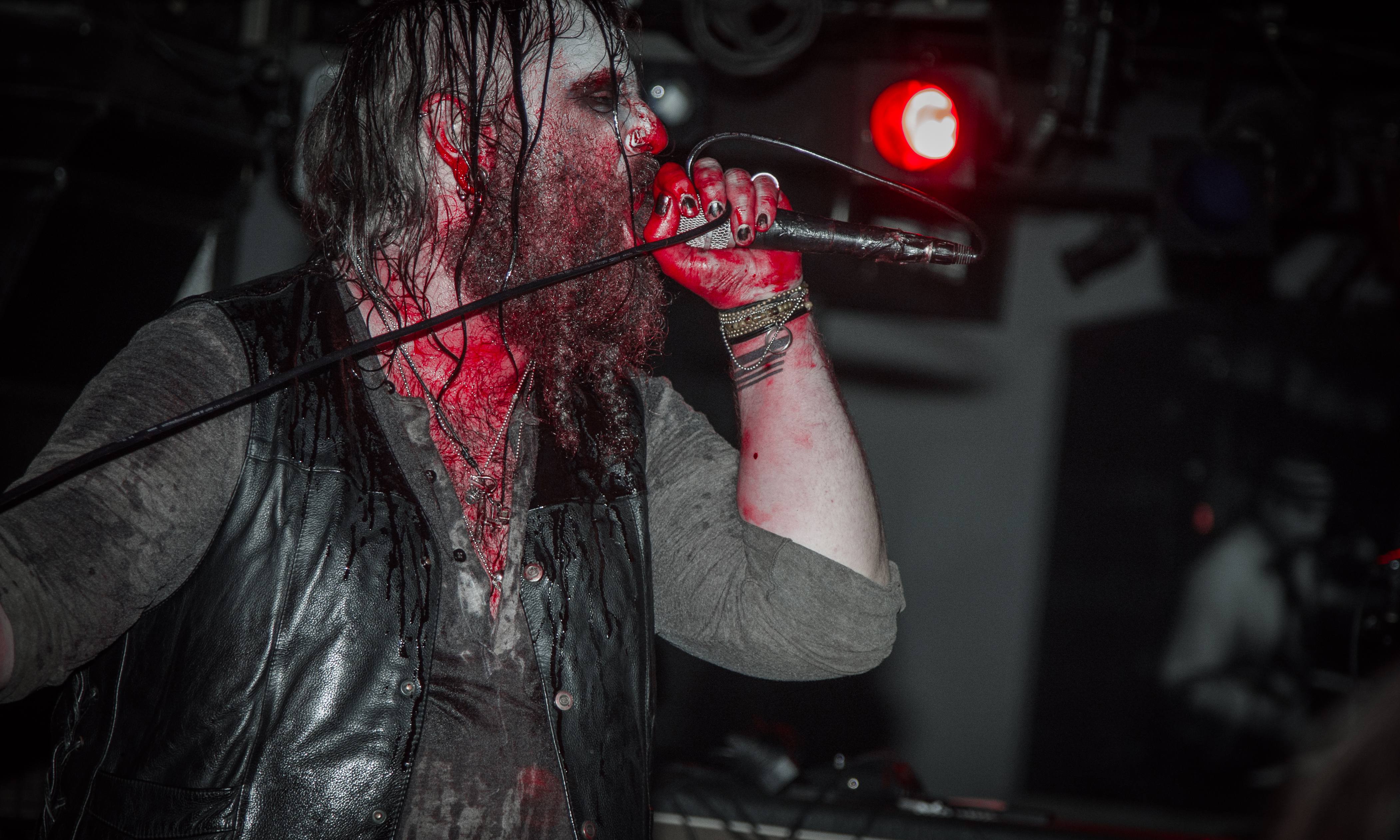 I’ve been to Oslo a few times before. Since all I can afford to drink in Norway is tap water, I’ve always been sober enough to retain at least a slight idea of where I was going. It’s a little discouraging how much you can let yourself forget in the span of a year or two, though: this past weekend, I was back again for this year’s Inferno Festival and completely oblivious to my surroundings. But being a little turned around was no preparation for the void I was about to enter.

After making an affable hotel employee draw me a map for the five-minute walk to my destination, I waffled between the venue’s several entrances. I looked pathetic enough that one of the stoic security dudes finally took pity and pointed me towards the smallest, darkest stairway to the Bushwick Bar. The minuscule sometimes-venue is part of the greater Rockefeller music and entertainment complex in central Oslo, and Bushwick specifically was originally imagined as a speakeasy of sorts. The thought of any Scandinavian country outlawing booze was chortlesome enough to diminish some of the “speakeasy” vibe, but at least it was appropriately dark and candlelit down there. The cocktails were as expensive and foul-tasting as one would expect from one of Brooklyn’s finest self-important watering holes, too, so for a minute it felt like home.

That warm little glow didn’t last long, though, thanks to the uneasy ambiance conjured up by Oslo noise artist Toft. I’d missed the first half of his set thanks to an ambition-slaying combination of exhaustion and exasperation (shout out to Florence airport!) but caught a good chunk of the mellow, pulsating Skullfloweresque noise that made up his set. Toft’s set was harsh, but strangely tranquil; a quiet warning of the oncoming storm. There was one more performance left… 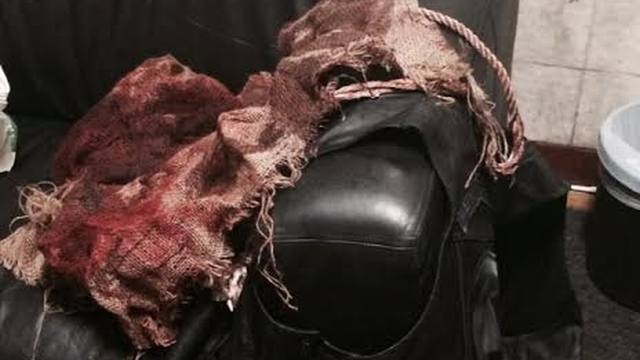 After his set, wreathed in cables, Toft dumped his laptop in my arms and headed upstairs to the green room, beckoning for me to follow. Luckily we’ve been friends for awhile, so instead of telling him to fuck off, I followed suit. He opened the door and an unexpected stench of decay smacked me in the face. “What the fuck is that smell?” I wondered. The culprit was a ragged burlap garment caked in filth and rotting blood that had been tossed on the black leather couch. A few Watain jokes were made. “Ah, that belongs to Thomas.” Uh, okay.

A few minutes later, a burly, corpsepainted Swedish gent walked in, nodded to us amiably, and quaffed a beer. “This is Thomas.” We shook hands. Blood streamed down his cheeks and dried in his beard. His irises were red. After a glance at the time, he finished his beer and pulled the burlap over his head, tying it tightly around his neck with a bit of cord. It was time to leave.

Our man Thomas (known far better as “gothic death industrial” provocateur Trepaneringsritualen) then proceeded to deliver a shattering performance of the most visceral sort. It was terrifying. His self-christened take on “Götisk Dödsindustri” marries waves of punishing, abyssal noise with his own psychotically distorted, barely human death growls. As mechanized as the music can sometimes feel, Trepaneringsritualen’s live performance is a brutally human experience. It’s messy. It’s uncertain. It’s fucking gross. 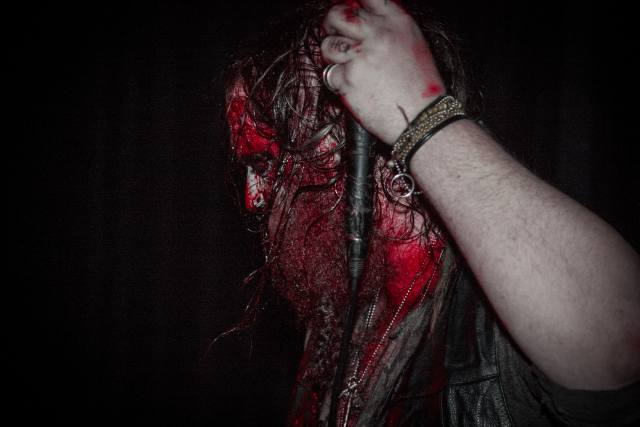 Thomas hurled himself around the small room, nearly toppling over again and again, throttling his mic like it owed him something. Pressing his stinking visage into the watchful crowds’ faces, roaring from the dankest inner recesses of his gut, perfuming the air with fetid rot, Trepaneringsritualen forced us to bow to his will. As he explained, “the best way to describe what I usually do in a live setting is an ecstatic revery, trying to invoke the great blackness of the void, to evoke the absolute terror of facing that abyss. It’s as much a ritual performed for my own sake, as it is an invitation to the observer to face that terrible uncertainty and embrace it as a step towards KNOWLEDGE.”

The material he performed was predominantly drawn from his upcoming new album (Perfection & Permanence, out on LP and CD on Cold Spring in May), and he was kind enough to share a setlist: 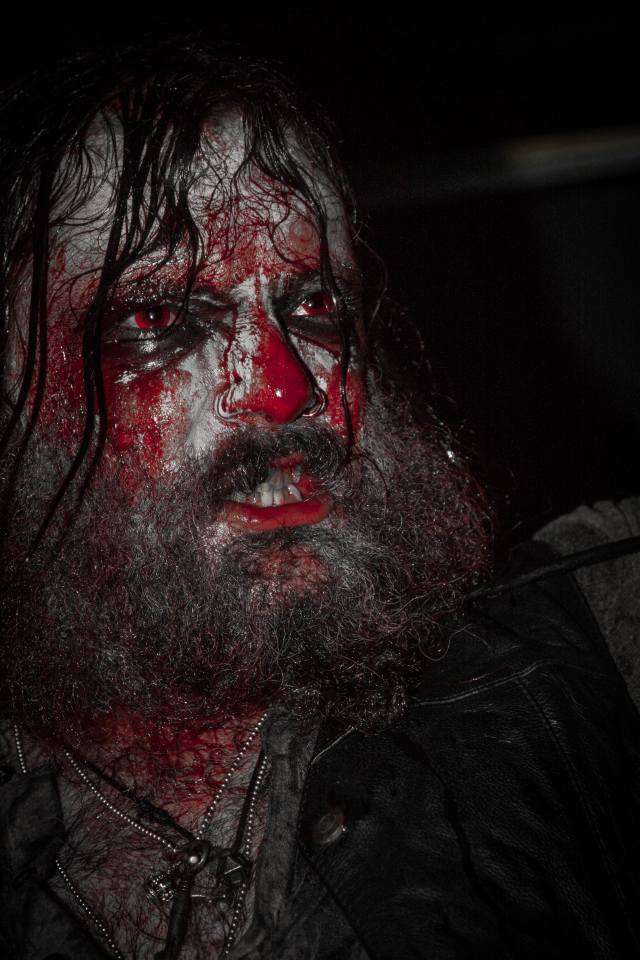 We headed to the bar after, and I noticed that Thomas’ irises were still red. “Yes, they are very painful,” he shrugged. I suggested he take them out. He looked at me for a moment, shrugged again, and carried on walking. Toft told me later that Thomas wasn’t wearing colored contacts like I’d assumed.

“He smeared them with blood.”

“The blood is a mixture of cow, pig, and some of my own,” he explained when I inquired later. So essentially, the night before Inferno kicked off and dozens of grim-faced black metal bands were slated to desecrate Christendom all over the place, this mild-mannered but intense dude had casually soaked his eyeballs in animals’ blood, terrorized a roomful of jetlagged strangers, and then strolled down to the bar for a whiskey sour.