Whatever else they may be, Somewhere In Europe aren’t a “clone” band. Formed from the ashes of a band called Basic Essentials in 1983, they have released four cassettes on their own These Silences label, each progressing through a moody, surreal succession of soundscapes, drawing on collage, post-industrial atmospherics and highly personal songforms to create some very individual music. Take the ominous windy drone and scared squeakings of Butterfly in a Vice (from Liturgy of Anguish); or the church bells, tinny drum machine, hesitant glockenspiel and flamenco of Under the Sun (from Dark Days); or the gloomy guitar strumming and buried vocals of Never Go Back (from Know Your Enemy). Random selections that both illustrate their diversity of content and more cohesive styling: it wouldn’t be unfair to suggest that Somewhere In Europe’s recordings share a certain angst, a fondness for the minor key that inevitably creates a disquieting feeling. There is a definite musical kinship with Death In June (with whom they have collaborated), although Somewhere In Europe’s use of collage and juxtaposition sets them well apart. Perhaps it’s as well to let the group speak for themselves. A few questions seem in order … 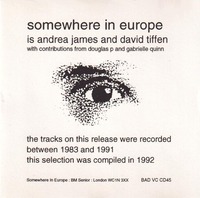 BD: Could you describe your musical histories? How did you get into music and develop to the point where you are today?

SIE: In the mid-seventies, we lost interest in rock music and we started going to lots of gigs of improvised music in obscure clubs in London. The freedom and spontaneity of the performances inspired us and we began making improvised music ourselves which we recorded on an old reel to reel tape recorder. Punk got us interested in rock again. We became involved with a band called The Sleep. David managed them and did publicity and organised gigs. Andrea then formed a band called Basic Essentials. David managed them, did their publicity etc and he also wrote lyrics for some of their songs. Two cassette ‘singles’ were issued and they generated record company interest. The band started recording a new cassette but they split up before it was finished. Somewhere in Europe emerged gradually after we bought a four track recorder and started experimenting with different musical formats.

BD: How has your music changed since you started Somewhere in Europe? What were you initially trying to do that differed from the more conventional music you made before?

SIE: None of the music we have been involved in has ever been really conventional. Basic Essentials was quite an experimental group despite having the familiar drums, bass, guitar and vocal line-up.

BD: What are your methods of working? Composition?

SIE: Our music is composed or created in a variety of ways. We might start with a piece of “found” sound or a voice taken from TV, and then add other elements, or we might start composing and building up layers of sound on the synth to which we add noise or “found” sound. Occasionally, we take an existing song and strip it down and reassemble it.

BD: What sorts of things are you trying to do on the latest cassette, Liturgy of Anguish? A lot of your music seems to combine melodic/conventionally harmonic sounds with more dissonant textures, to provide an unsettling, slightly disturbing effect. How important is this tension, both in your music and in your lives?

SIE: Our music often does mix melodic and dissonant sequences – usually quite deliberately to create uncertainty or even disquiet. The resultant tension is important as it helps to keep the listener alert. We do not think of our work as being cathartic but it probably does allow us to release some of our feelings regarding society and human relationships.

BD: On one track you quoted some of Aleister Crowley’s favourite slogans. Is he an influence on your lives?

SIE: The track you are thinking of is Blood Of Martyrs. This is our version of Death In June’s Rule Again, which was written by Douglas P and David Tibet, both of whom were, at that time, interested in Aleister Crowley and his beliefs.

BD: How personal do you feel your music is? For me, it sometimes sounds distant and detached, cold maybe. To what extent is it a direct expression of yourselves?

SIE: Our music is very personal; we do not feel we are cold and distant as individuals, but that is for other people to decide.

BD: It also doesn’t sound particularly “uplifting” to me. Does this reflect any particular view of people/the world?

SIE: Our music is not intended to deliberately uplift or depress. We are primarily interested in producing music which reflects or evokes a mood or atmosphere. It is not meant to reflect a particular political or social consciousness; it is intended to be more universal than that. It is up to the individual listener how he/she responds to it. Having said that, though, we do have a largely pessimistic view of humanity. As individuals, however, we are largely optimistic.

BD: It seems to me that the earlier SiE releases had more humour and irony than the last two. Is this fair? Any reasons for the gradual change?

SIE: We are not aware of a deliberate move away from humour and irony although we have become more distressed about certain aspects of our lives in the last few years, and that may have affected our work. Also, one can’t always predict what another person will find humorous. Occasionally, we have felt something was serious or even grim, and someone else has found it amusing!

SIE: As we’ve already said, we don’t deliberately set out to provoke any particular emotions. Also, we do not desire any particular response to our work. The reaction to our music has been largely positive, which we find very encouraging. Sometimes, we have come to dislike a track and then someone has written to us or reviewed the cassette and responded to it in a fresh way and that has made us reassess it. We find this interaction very interesting.

BD: How have other artists, writers, filmmakers or musicians influenced you? Do you feel part of any musical or artistic movements? You have said that you were influenced by people like the Dadaists or the S.I. In what ways?

SIE: We have been influenced and stimulated by many people over the years. It would be impossible to list them all – we have attempted to do so in other interviews and always found the lists are too arbitrary. All those listed take on equal importance whereas their significance to us is variable – one person may have remained an influence over years, another’s power may have evaporated swiftly but been potent for a short time. Musically, we have listened to a wide variety, from sixties rock to industrial, from electric folk to techno, from disco to punk! Similarly, the writers, film makers, painters who have influenced and stimulated us are many and varied. We identify with the European avant garde tradition. Like the Dadaists, Surrealists and the Situationists, we would like to see the collapse of the distinction between art and the rest of life.

BD: It’s a very unusual sound for a British group: do you feel isolated in this country? Part of any particular network/community?

SIE: No, we don’t feel isolated. We are in contact with a large number of individuals all over the world with whom we exchange letters, mail art, cassettes and publications.

BD: How did you come to be involved with members of Death in June? What have you done together? How do you feel their European/romantic visions relate to your own?

SIE: We first met Douglas at Rough Trade records when RT was distributing the Basic Essentials cassettes. Later, when a friend wrote an article on Death in June, we took some photos of the band to accompany the article. Douglas liked the photos and used several of them as publicity pictures. He then began inviting us to DIJ gigs and the friendship has grown from there. Andrea contributed bass and backing vocals to many of the tracks on The World That Summer LP, and she contributed a vocal to one track on The Wall of Sacrifice LP. Douglas has contributed to three out of the four SIE cassettes. Despite these collaborations, DIJ and SIE remain individual units with their own unique visions of the world. 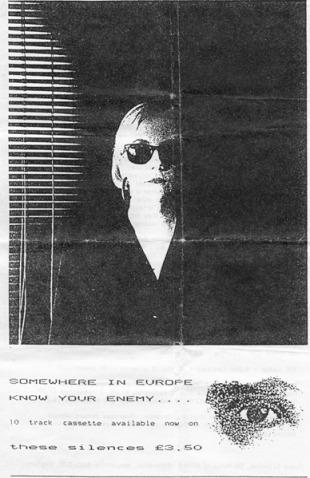 BD: So far, your own releases have been on cassettes. Is this just convenience or do you have any particular attachment to the medium?

SIE: We use cassette and not vinyl for a number of reasons. It is very economical; it is reusable; it is easy to send through the post. Although some shops do take copies to sell, we like distributing them through the world wide network of people involved in producing cassettes, zines, mail art etc. We feel that independently produced cassettes present a real alternative to the record industry, just as publications like EST offer an alternative to the mainstream magazines.

BD: What plans do you have for the future?

SIE: We have lots of plans, but whether they will come to anything remains to be seen. We may produce a video which would match images to our music and there is a strong possibility of a CD release containing a selection of tracks from the four cassettes.

This CD has now been released on N.E.R., distributed through World Serpent.

(Interview carried out by post in April 1992 and © by Brian Duguid.)